Bond Girls Are Forever! The fourth chase set is an update to already existing nine “Femme Fatales” previous released as a chase set with "The Women Of James Bond In Motion". The new “Femme Fatales” cards are numbered from F10 thru F18 and randomly inserted in 1/12 packs. To make the cards sparkle forever, they were printed on a shiny metal foil base. One problem occurs here, the reverse is printed opposite compared to the first nine Femme Fatales cards. Go save the girls Mr. Bond!

Every James Bond collector would like to own a piece of the action. Prop or relic cards are the easiest way to own a little piece of an original film used prop. The new relic cards are an expansion to the ones previous released with the "James Bond Heroes and Villains" trading cards. The numbering starts from JBR14 thru JBR26. The card JBR6 is issued as a 9-case incentive case topper, but card JBR11 is still missing, perhaps this card will see the light with the next card set. The following is a list of all the new relic cards. They are all sequentially numbered, JBR21 is the most difficult one with a production of only 200 cards. That's only one card for every 35 boxes, if you're lucky.

Prices in that region really do scare the living daylights out of me. Also quiet rare are the cards signed by Michael Madsen, he is the only one that signed with red ink. The same card signed in blue ink was available through the Rittenhouse reward program. The last autographed card is a duo signed card by Richard Kiel and Blanche Ravalec. A few years ago I met Miss Ravalec at a movie convention in the Netherlands where she attended a signing session. A very nice lady who lives in Paris. Please enjoy the cards here below.Please enjoy the cards here below.

Case toppers, three-case and nine-case incentive cards are a must have for the many collectors. This trading card set comes with three different case toppers. The first case topper is the card VB6 picturing Daniel Craig. The card is an addition to the already five existing "Bond Vintage" card collection issued in 2004 with the "Quotable James Bond" trading card series. Card JBR6 is a relic card holding a piece of leather from the speed boat used in "Live And Let Die" and an addition to the "James Bond Heroes and Villains" chase card set, when you purchased three cases, then that card is already yours. The nine- case incentive card contains a piece of Daniel Craig’s shirt that he use to wear during the casino scene in "Casino Royale" and, the card is also personally signed by himself. A must have for the die-hard collectors.


If your wallet can afford to buy 18 cases, then Rittenhouse Archives has the pleasure to offer you the James Bond Mission Logs Archive Box. The archive box doesn't contain the base set and the 3-case incentive card. 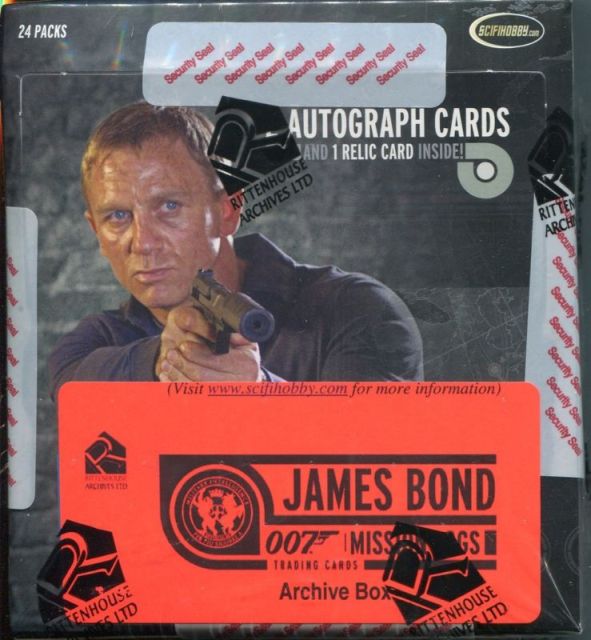 And last but not least is the exclusive binder to stock all your precious cards. The binder comes in black scuba vinyl with a background showing the MI6 logo. The centre displays the mission logs trading cards logo. As always the binder comes with the promotion card P3 showing an action scene from "Live And Let Die". 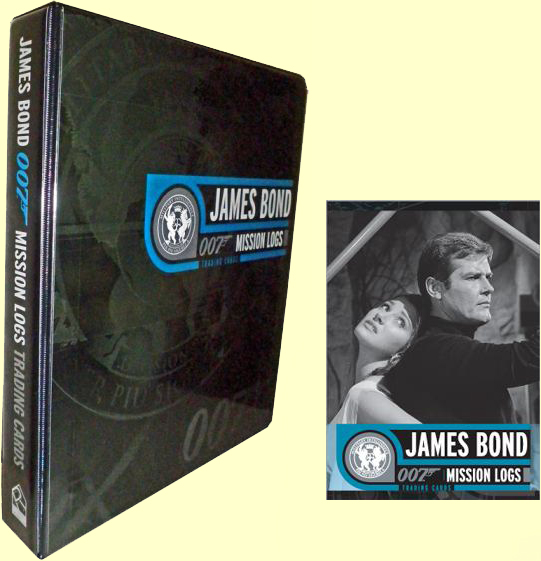 Only sixty six basic cards, each card side displays one action scene. So there are one hundred and thirty two new pictures to collect. Starting from "Dr. No" thru "Quantum Of Solace" each movie has three cards, some cards are in full colour, other are printed in black and white. Don't ask me why? In 2014 with the release of the "James Bond Archives Edition 2014" an expansion set was included holding three "SkyFall" cards. So we just have to wait for the three "SPECTRE" cards to complete all the movies.